I've been going out with Daniel for a few months.....well, having said that, we are not having a gay love affair or anything, we are both keen on dancing tango and so we go to milongas together every now and then. 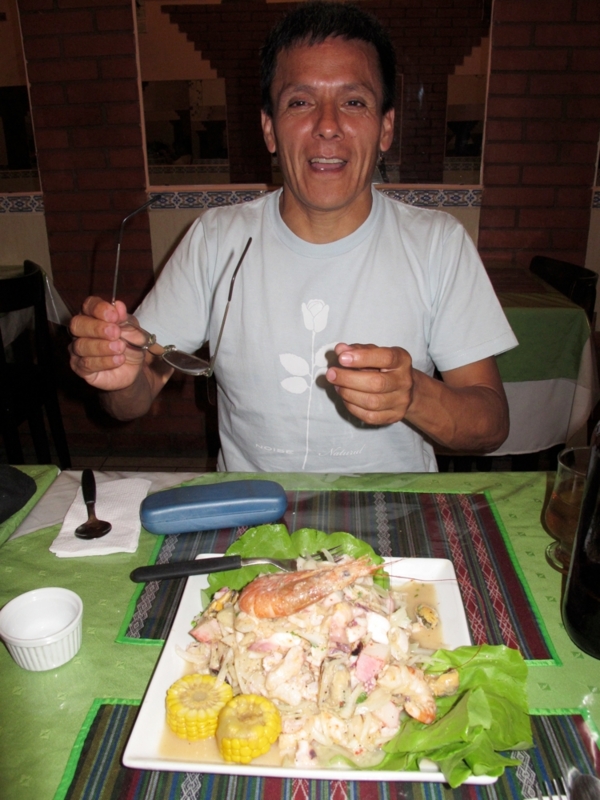 (We celebrated his 52 year-old birthday with peruvian ceviche. That was super delicious!)

Daniel has recently been devoiced so he'd like to find a life partner at milongas but it has been unsuccessful unfortunately.

The reason behind is that he just doesn't talk to women between songs.....in milongas, you dance 3 or 4 songs with a woman, then you always have a good opportunity to befriend with them while you are waiting for the songs.

Once Daniel asked me what I always talked about with them cause he often saw me talking to them in a friendly manner.

For me, it's really easy to start a conversation. First of all, I am a foreigner and furthermore I am Asian so people are quite curious about where I'm from and why I'm here and so on.

Secondly, I'm not looking for a life partner or anything, I just want to dance so I start talking to them without much thought.

Another time, Daniel got hooked on a Korean girl who looked under 25 years old and wanted to ask her telephone number. Unwillingly, I had to tell to Daniel how a man was supposed to ask a girl's telephone number.

" You can't just ask her telephone number straight away! You should come up with an excuse!"

"Obviously, you are both tango lovers so you can mention her about another milonga then ask her whether she's been or not." I told Daniel and went on saying:

Frankly speaking, I was kind enough to give him some basic tips then what turned out to be that she claimed she had no telephone in this country...Oops.

Having seen me talking to many girls in English at milongas, Daniel decided to learn a bit of English.

Daniel has no English and I've no idea what he is going to talk about after he says that.....

The other day, he told me about his friend who went out with an Argentine girl and went to her house then did the thing. But after everything happened, she didn't want to see him again.

"Yuki, in Spanish, this is called Touch & Go so in English tell me how you say?" Daniel asked.

O.K, what I told you wasn't entirely true that he knew at least one phrase in English....Touch & Go but without realizing that it was English.

In English, it is called "One night stand", as we all know.